Nancy writes ‘There are on average 133 days of rain in the UK each year. Given this figure, it was ironic that the day on which a new poem about rain was to be unveiled at Canary Wharf dawned cold and dry.

The poem had been commissioned by the Canal & River Trust to change perceptions about ‘bad’ weather and encourage people to visit the waterways even when it is raining. After all, those 133 days of rain mean a lot of opportunities which could be lost by waiting for sunshine. As a kayaker, I found myself in sympathy with the subject of the commission. Getting soaked is an integral part of paddling, and the many birds and animals I’ve encountered on the canals suggests they aren’t particular about keeping dry either. Besides which, a canal appeals to all the senses in wet weather, offering a richer range of watery sounds, smells and a more dynamic surface appearance.

The group from the Poetry Society and the Canal & River Trust who assembled at West India Dock had another reason to actively hope for rain. The poem had been sprayed on the towpath in hydroponic ink, a substance which is only visible when wet. Fortunately, Julia Bird, The Poetry Society’s Project Manager, had come equipped with an elegant red-and-gold watering can, which served as our raincloud for the day. 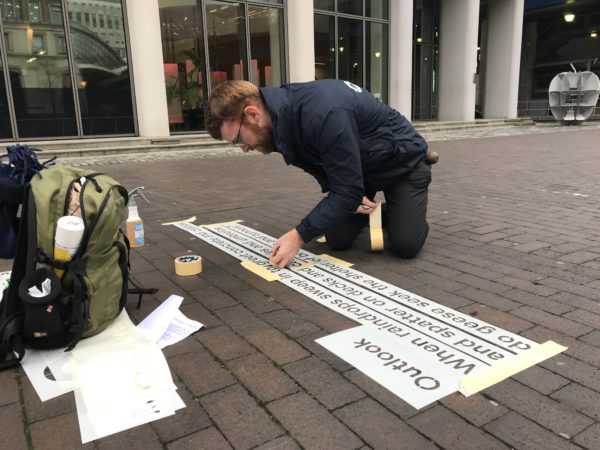 The poem, titled ‘Outlook’, was revealed line by line as I watered the red brick paving on the dockside. ‘Do dogs tiptoe round the towpath’s big puddles?’ it asks. Where better to find out, than on the Isle of Dogs? The imposing Canary Wharf towers shimmered above the waters of the dock. Would people working in those offices glance out and see the words appearing on the ground, as if from nowhere? If so, they would be getting not only an incentive to rush out into the rain, but also an insight into the process of writing a poem.’

Julia adds… the poem has now been installed permanently in paint, to the left of North Dock Bridge on the north side of West India Quay.

When raindrops sweep in to greet concrete and cobbles
and spatter on decks and cagoules and umbrellas
do geese seek the shelter of bridges and tunnels?

When the downpour creates a barrage of bubbles
which shatter reflections and radiate ripples
do dogs tiptoe round the towpath’s big puddles?

Rain sings one refrain: no storm lasts forever
but when forecasters promise a rise in air pressure
do fish watch the skies for a change in the weather?

Follow Nancy Campbell’s adventures as she reports on her poems and projects during her time as Canal Laureate.

Scroll back for posts from previous Canal Laureates Luke Kennard and Jo Bell.