In search of lines for a crowd-sourced poem, Canal Laureate Nancy Campbell visited the Oxford Canal Festival earlier in October. She writes –

‘Canals and railways often keep close company through cities. They run alongside each other, separated by only scrubland and secure fencing. Same route, different speeds. This proximity is very convenient when getting to Canal Poetry events. As I wheeled my suitcase north along the towpath from the station in Oxford, the train I’d just descended from blasted its horn as it sped away, disappearing in a blur towards Birmingham.

I’d just returned to Oxford after a week at Totleigh Barton, the Arvon Foundation centre in Devon, where writers have no internet access and, consequently, lots of time for conversation and creativity. I wondered if my return to the real world would be challenging.

A walk along the canals seemed to be a good way to ease myself back in. I trundled my case over the small, steep bridge at Louse Lock and passed the Jericho Boatyard – immortalised in Philip Pullman’s YA novels – currently boarded up pending development. I dawdled a little to enjoy the narrowboat roof gardens, at their late summer best. But I didn’t have all day: soon the Oxford Canal Festival would be kicking off in Aristotle Park.

On reaching the park I found the Dog Show underway (categories included ‘Best Biscuit Catcher’ and ‘Best Trick’) in an arena marked out with straw-bales, which would later host the Canal Olympics for humans. Powered by gigantic slab of Chocolate Guinness cake from the Restore fundraising café, I spurned these sports and instead took up my position in the Arts & Crafts tent where the Oxford Canal Ever-Growing Poem had already begun.

Few people arrived here intending to write poetry. They came for the promise of painting roses and castles on paper plates, trying their hand at spinning yarn, making waterway-themed mobiles or designing their own narrowboat. However, some could be persuaded, especially as the day went on and the cider flowed in the neighbouring marquee. 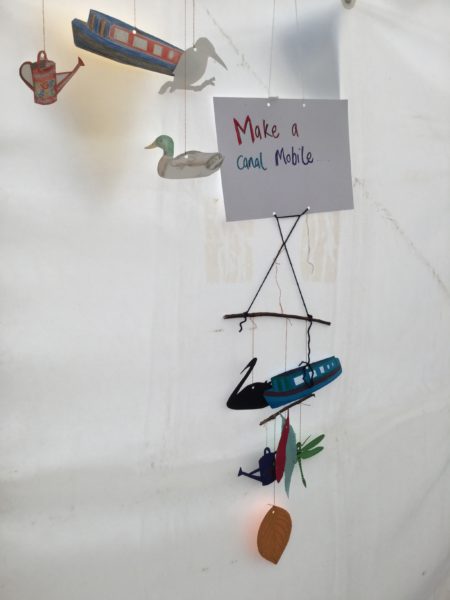 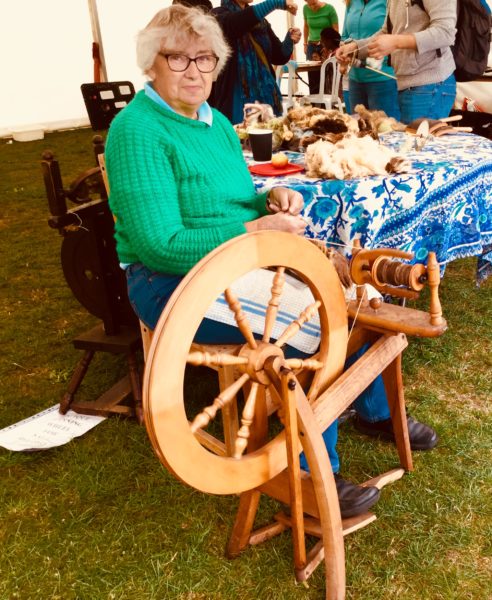 I invited rhyming couplets, which came with varying levels of attention to metre, and indeed rhyme. But this was a joyous occasion, and not one for strict poetry rules. The lines accrue on a long roll of brown parchment hung from the marquee joists, so people can see what has come before. Perhaps inspired by the antics in the arena outside, the composition process seemed oddly motivated by competition. People wandered over and read the most recently completed lines, and were keen to show they could do much better. Yet the best lines were often those most swiftly and spontaneously given.

The poem was not without editorial control. After an hour or two, I felt there were rather too many mentions of dog poo building up. Maybe we should start to generate a cleaner picture of canal life. ‘What do you like best about the canal?’ I prompted the next in line, Alexis, who looked around three years old. Dog Poo! he shouted triumphantly. ‘Maybe just dogs?’ I asked nervously, looking at his father for help. Alexis and Co. obliged by giving me one of the most surreal couplets in the whole poem.*

Eventually the afternoon drew in and a rainstorm whipped up outside, driving festival-goers on to other entertainments. I rolled up the poem and squeezed the epic paper roll into my case, before hitting the towpath again.

* Some mentions of dog poo have been removed in the final version.’

From Hythe Bridge Street to Banbury

here’s some of the things you’ll see.

beside the towpath, mile upon mile.

Hundreds of plant-pot gardens aboard:

daisies, tomatoes and the odd gourd.

to take you north to Wolvercote.

The glittering water catches the sun

as the hull drifts past a majestic swan

and amazing animals painted on walls –

it’s a world away from the shopping malls.

As the narrowboat continues to glide

from Port Meadow to the countryside

of ragged robin and elderflower

in summer green, in autumn yellow

so just chug along, feeling mellow,

looking backwards from the tiller

but steering it with ease and skill.

Adventures! Pass through all the locks

without accidental bumps and knocks

then vanish under the willow trees,

or lose your hat in a sudden breeze.

You don’t need a boat to see the canal:

you can walk or cycle it just as well.

Dribble a ball along the towpath –

it keeps you fit and makes you laugh.

After school, get on your marks

for the swings in Aristotle Park.

A philosopher’s park? – you bet!

There’s even a bridge named after a poet:

(she loved the water too, you see).

or just to escape your workstation.

Bring the dogs at the weekends

and watch them making new friends:

dogs with flowers, dogs with sticks,

where the anglers sit with their fishing nets.

but the ducks couldn’t care less.

Joggers in Lycra, commuters in suits,

to relish woodsmoke and cooking smells

and as reggae plays in Jericho –

And once a year there’s a free festival

to celebrate the joy of it all…