In mid-July I was making my way through Liverpool Central station, wearing a buoyancy aid and carrying a paddle that hindered my progress through the rush-hour crowds. My costume drew many curious looks. Objects that go unremarked on the water generally look surreal on the streets. In this case, I was a walking reminder of the novelty that canals offer city-dwellers, and the possibility they provide of travelling to new places.

My own route was to be a 126 ¼ mile journey along the Leeds and Liverpool Canal. From Liverpool, the canal arcs through Bootle and Maghull, then north through Lancashire from Burnley to Skipton, before curving back south via Bingley to Leeds. On the map it resembles the arched back of a caterpillar. It’s not the most direct route between the two cities: when it was built, its course was constrained by geology and land ownership. Now it forms one half of the Desmond Family Canoe Trail, Britain’s only coast-to-coast waterway, which is managed by the Canal and River Trust. 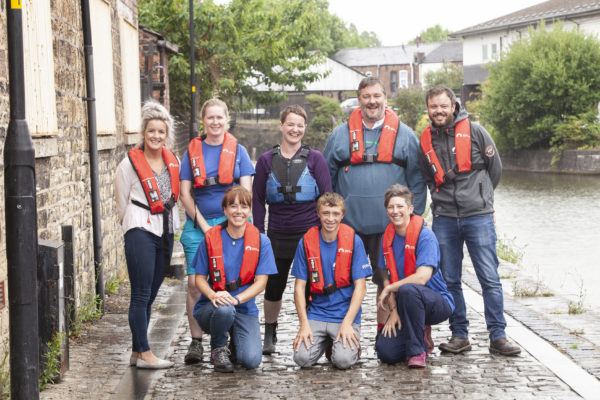 With the Desmond Family Canoe Trail Team in Wigan, in a rare moment of rain

I set off to rumours of water shortages. (A hosepipe ban had made the front page of the tabloids.) I paddled through intense heat and relentless dry days. At the highest point of my route in the hills around Pendle, I looked down into reservoir basins which were almost completely drained. Even canal life was affected: some locks were closed to preserve water, and fewer narrowboats than usual were travelling the canal. I passed Canal and River Trust hydrology managers reading the water level; later reports which named this the third hottest July since 1659. It was hard not to see such extreme weather as an indicator of climate change.

I paddled through cities and countryside. The canal passed between the backs of grand factories in Burnley and Saltaire, and pretty suburban gardens in Chorley. The old wharves were eerily atmospheric, and mostly empty, but there was life at the new marinas, where people were trading from their narrowboats. My days were paced according to the rhythm of locks and swing bridges – both offer distinct challenges to the kayaker. I became used to wriggling down the bank to get back into my kayak after a portage, or limboing under the swing-bridges while cars rattled overhead. When I grew weary, I looked out for the milestones which counted down the journey like a metronome.

Half-way along the canal is the mile-long Foulridge Tunnel – only recently opened to non-powered craft. Here I was joined by Jasper Winn (CRT Writer in Residence and author of the book Water Ways). I was glad to have Jasper’s company, not only for the 20 minutes it took us to paddle through the dripping darkness of the tunnel, but for the rest of the day too. Also on the water that day was Greg Brookes from the Canal and River Trust, a lifelong paddler who knows the Trail like the back of his hand. Greg generously shared his knowledge about the places we paddled through, but this was not all he passed on – he found an abandoned football floating in the reeds, and used it to teach us some nifty water polo manoeuvres.

Even on solo paddling days, I wasn’t alone for long. There were meetings with fellow paddlers, anglers and passers-by on the towpath. I won’t forget Margaret, who lives just outside Wheelton, and walks by the canal every day. ‘In summer the sky used to be black with swallows here,’ she told me. ‘Not anymore.’ The staff of the Premier Inn Chorley North waxed lyrical about the canal, which they use for their annual sponsored walks – it was certainly a contrast to the motorway. This being high holiday season, there were volunteer lock-keepers in attendance to help the hire boats through the locks, and while I didn’t need to rely on their muscle, I found their knowledge invaluable. At Bingley Five Rise Locks, Claire told me about her plans to keep bees in the tiny garden behind the lock-keepers’ office – and Craig at Newley Three Rise showed me the well-thumbed copy of Blake’s Songs of Innocence and Experience he keeps in his portacabin, and we talked about poetry until I had to tear myself away…

…For there were many activities scheduled. Shortly after setting off in Liverpool, I stopped at Safe Regeneration, Bootle, where I joined volunteers turning old canoes into planters for a community garden. In Burnley, I met the Super Slow Way team, to find out more about their exciting arts programme. And of course, this summer you’re never far from a litterpick on the waterways. I was able to join SLYNCS volunteers who were out in canoes to clean the canal around Blackburn Top Lock. Huge thanks to Danny Matley and the team at the Desmond Family Canoe Trail for their liaison behind the scenes to make these experiences possible. 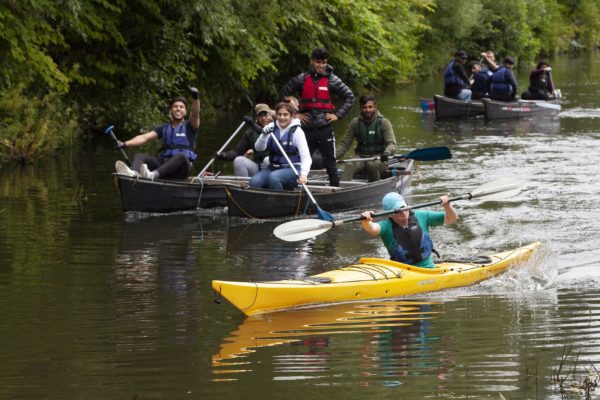 Just outside Leeds, I met Alarum Theatre  on their summer tour of The Idle Women: Recreating the Journey (a finalist in this year’s Living Waterways Awards). They generously invited me to share their stage by the water that evening, and I read some new canal poems between the acts. Heather Wastie’s closing song ‘The triumphs of boatwoman Nancy Smith’, was a rousing audience-participation number. I was thrilled to learn stories of Nancy, my forerunner on the Leeds and Liverpool, and for several days after I came off the water the chorus rang in my ears: ‘along the Leeds and Liverpo-o-o-oool’!

The poems I wrote on my journey will be out and about in the world soon, and a concrete poem created in collaboration with David Armes is in The Poetry Society shop.