With the approach of winter, alternative acts of festive fun unfold around the canal network. Gaggles of Santas race to complete their rounds in canoes rather than in sleighs and fairy lights decorate boats rather than trees.

As the nights lengthened, I was asked if I wanted to watch a flotilla of sparkling boats cruising along the Union Canal, on their way from Almond Aqueduct to Edinburgh city centre. Of course I did!

The invitation came from Marion, who lives on her own not far from Craiglockhart, where Wilfred Owen and Siegfried Sassoon were treated for shellshock. The Union Canal was a century old at the time of the First World War. I wondered whether the soldiers were aware of its existence, flowing less than half a mile from the grounds of the military hospital? But last month, it was Owen’s association with another waterway that was in the news. Now, with peace as elusive as ever, Craiglockhart with its military memories seemed a fitting place from which to watch a hopeful cavalcade of boats. 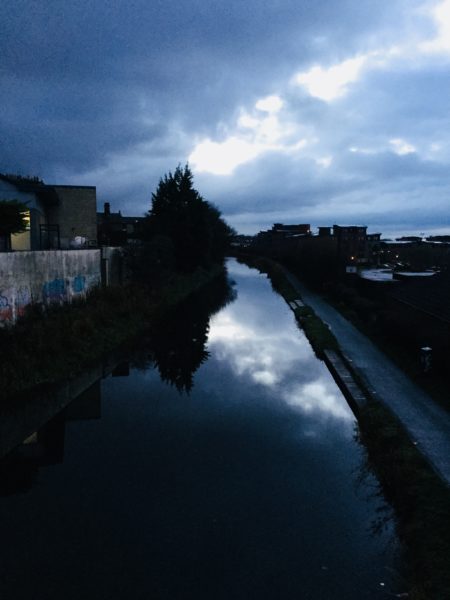 I met Marion at Meggetland Bridge at dusk, and we stepped out briskly, dodging the puddles. I’ve known Marion all my life, and I hope that when I’m her age, I’ll share her determination to be active and interested in everything the world offers.

Rainclouds rolled above the branches of the trees as the sun sank behind Costorphine. I’d explored this towpath back in the spring, but it felt like a very different space in the dark. Marion and I linked arms to descend the uneven steps, and walked carefully between the cat’s eyes – green, red, and white – which mark the bends for the benefit of cyclists. 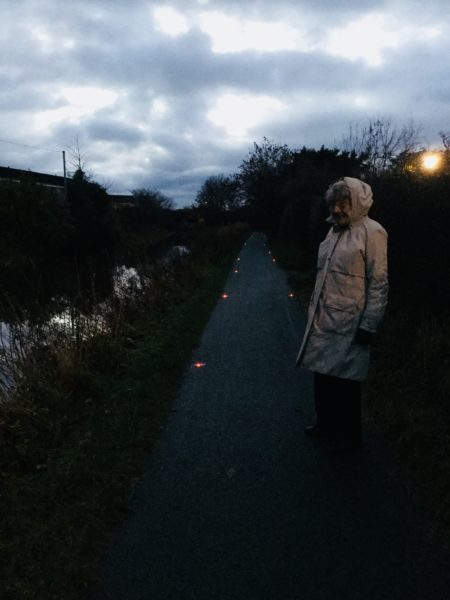 We headed west towards Glasgow, in the direction we believed the boats would come from, past the graffiti on the back of the shops, and the bungalows with potted palms in their gardens. A roar erupted from the rugby stadium, where a big match was in progress. The sound of the crowd only made us feel more cut off. Our steps took us further into the unknown and the thunderous dark and no boats were to be seen. I tried to persuade Marion to turn back.

‘Maybe they’re already at Leamington Bridge! I think we may have missed them…’

But Marion had no such doubts. We pressed on, and every streetlamp or bike light was potentially a festive boat approaching, until it wasn’t.

By the time we reached Slateford Aqueduct, even Marion admitted our mission might have failed. Then I heard soft music in the distance, a beat which resolved into a song: breathe easy. A boat appeared slowly around a bend in the canal, strings of twinkling blue lights trailing over its sides, and reflecting in its wash. We were not alone any longer.

‘Hello!’ Marion called out across the water. ‘We came specially to see you!’ The crew waved cheerily.

Marion counted the boats as they came past. The style of decor differed: one boat sported a glitzy reindeer rampant, and a star gleaming on its prow; the next had a more homespun approach, with candles in jam jars arranged between the bikes and plant pots on the roof. One vessel crashed into the wall of the aqueduct, and reversed, with much cursing; it must be hard to see the way ahead through all that distracting twinkle.

We walked back at the same pace as the boats, enjoying the celebratory atmosphere their lights brought to the canal. Back indoors, over a hot drink and Rich Teas, I asked Marion what she’d liked most about the evening.

‘Walking along with you,’ she said.

I was glad we’d been able to share the experience too, for neither of us would have done this alone. Now we had a memory of the company of others and the promise of light to carry us through the dark days around the winter solstice. 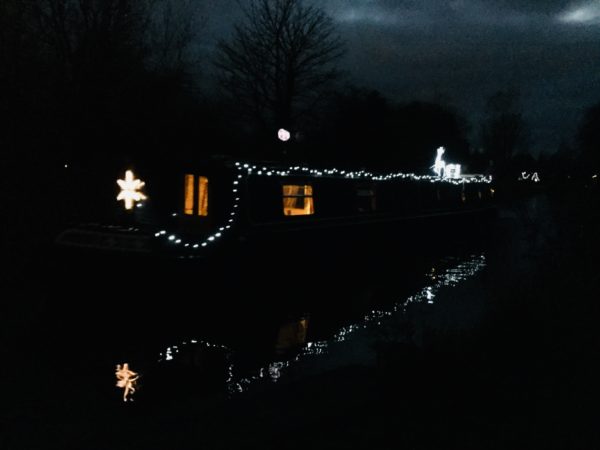