Over the summer, Nancy undertook an intrepid kayak trip along the Desmond Family Canoe Trail from Liverpool to Leeds. Along the way, she stopped to visit printmaker David Armes, who made a beautiful broadside of her ‘Canal Kayak Canal’ concrete poem. In between paddle pit-stops, they found time for this interview. 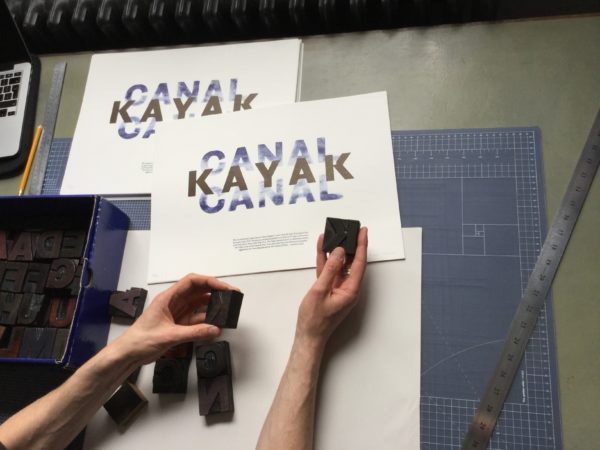 Nancy: David and I sat down for coffee at a table, covered in a laminated Ordnance Survey map of the landscape around his village. When not in his studio, it would seem he spends time walking in the hills. I asked David first, how landscape informs his work, which he describes as ‘exploring the spaces between print, geography and language’…

David: I have an academic background in Geography, particularly in how the land, the physical features around us, shape our experiences. How we move around, what constrains us, how we talk about that. In recent years, these features have started to make their presence known in the texts I use in my print work. I’ve always travelled a lot and something Robert Macfarlane said rings especially true: “What do I know only in this place?”. That’s become pretty central: what happens to my understanding in a certain place? And why is that?

N: I feel extremely fortunate to be working with you on this broadside because I know you don’t usually collaborate. Could you describe your usual process – your aims and the materials you use to achieve them?

D: Working primarily with letterpress means I work with words and language, fundamentally, represented physically as metal or wood type. I write a lot, but not in a particularly structured or meaning dependent manner. It’s more about generating raw material to work with at the printing press. During designing and printing (which can often be the same stage), the type is as much raw material as ink, paper and other tools. I rarely have a complete piece mapped out in advance. Rather, I have a mental image, sketches, photographs etc. and then allow the process to intervene throughout. Since early 2017 I’ve been working on a series of ‘text landscapes’. The series looks at the idea of responding to a landscape, of writing within and about a place, editing material during the print process, using the language and design to create a figurative rendering of that landscape. My hope is that they draw a viewer in from a distance but can also be read in detail up close.

N: I was fascinated to see the extra depth you brought to the concrete poem I presented you with through your handling of ink and type. For example the removal of ink to suggest the water – like a poem, it seems sometimes success lies in what is taken away. Could you tell me a little about your design decisions?

D: There’s certainly a strong element of minimalism in my work, and more broadly in how I understand the elements I’m working with. As a viewer or listener, I appreciate space left open in a painting, a song, moving images. That’s often how I find a way in. For this broadside, and from talking with you, it made sense to see the kayak as a solid object interrupting the canal, if only for a brief moment. That’s the imposition on the pace of the canal. The two words ‘canal’ are inked and then wiped with a white spirit rag by hand for each print, so they’re never quite the same, reflecting that proverb about never being able to step into the same river twice. Here, because a canal isn’t as freeflowing as a river,
they’re a little different on each print but they’re still always in the same position. 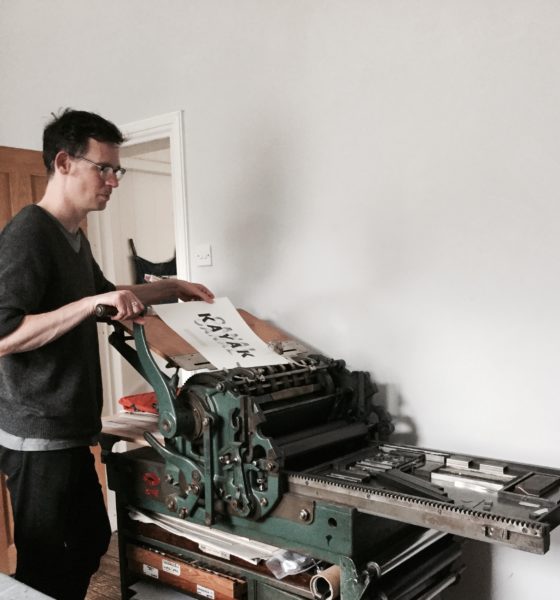 N: It seems apposite to use the technology of the printing press which in many ways reached its height of productivity during the same era the canals developed. Both have seen other technologies take their place in the modern world. But just as people are discovering new roles for the canals today as places of leisure and culture, letterpress is again growing in popularity…

D: Letterpress is still used as a production process in some situations but, yes, it’s been decades since it was the predominant print method. Plus there’s certainly a newfound appreciation for learning the skill in colleges and universities, particularly among graphic design and visual communication students who want to combine understanding of digital and analogue methodologies and who, indeed, don’t think in binary divisions of digital and analogue to begin with anyway. So there is that question where, once something is no longer what is was, what can it be now? Maybe that frees up thinking in some ways, whether for letterpress, canals, 35mm film or bellcasting.

As long as there’s some appreciation of past uses, what happens next doesn’t have to fit within a preconceived framework.

N: What’s next, now the wood type of the Canal broadside is back in the typecase?

D: I’ve just finished a mentoring scheme with PAPER Gallery in Manchester that culminated in a really interesting group show. My contribution is one of the largest pieces of work I’ve made. ‘N Y L Y N’ is a five-panel piece that explores the development of language. It was a more improvised process than I usually work on though I don’t think that’s apparent in the final work. Part of the approach is about how to use the repeating, multiples aspect of print but without focusing on an edition. (There are just two copies of this work in existence.)

I plan to create a body of work that continues aesthetically in this vein, using just black and white ink, with repeat overprinting to build up complex shapes and patterns.

The Constructure group  that I’m one quarter of are also showing recent and new work in upcoming shows over the next few months, in Leeds (October/November 2018), Llandudno (November 2018 / January 2019) and Wrexham (Spring 2019). And I’ve just returned from a residency in Cleveland, Ohio where I created a new iteration of my text landscape series.

David’s print of Nancy’s poem is for sale in The Poetry Society Shop.